After the disastrous week that the crypto market experienced, the morning of November 26 revealed a positive sign for the cryptocurrencies, with a sudden surge in their price. The total market capitalization has also seen an increase from $119 billion to $131 billion today.

This sudden spike has shown a significant change in the 24-hour statistics of the crypto market, with major coins increasing by up to 10%. However, the latter part of the day drove the cryptocurrencies back to the bearish end. Additionally, the weekly charts still remain to be completely red.

Beginning with Bitcoin [BTC], most of the cryptocurrencies are showing a double-digit loss in the past week. It can be noticed that the major losers of the top 10 include Bitcoin Cash [BCH], Stellar [XLM] and Cardano [ADA].

At the time of writing, the CoinMarketCap charts depict that the Bitcoin Cash ABC or Bitcoin Cash [BCH] is trading at $184.36 with a market cap of $3.2 billion. The cryptocurrency is trending at the 4th position by market cap and has shown a hike of 7.9% in the past 24-hours. However, during the last week, it has declined by 47.7%. The coin is being traded the most on the Korean exchange Upbit against KRW with 33% volume. This is followed by Binance and Huobi. 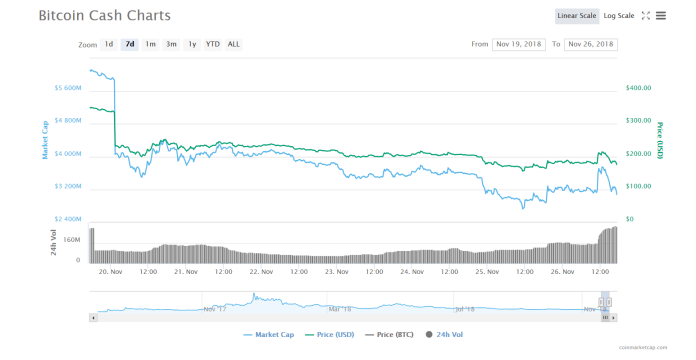 While BCHABC is clearly showing a downward movement, the weekly chart of Bitcoin SV is enjoying its bullish momentum. The beginning of last week saw Bitcoin SV trading at as high as $130. Later, the cryptocurrency was hit by the overall bearish trend of the market. By 22nd November, the coin had reached a low point, which is $36. However, it has gained the momentum and began to move further in a positive direction. According to CoinMarketCap, Bitcoin SV is trading at $108.5 now.

During the 2nd and 3rd week of this month, Stellar [XLM] showed tremendous performance in the market list with significant price hikes which led the cryptocurrency to overpower EOS to grab the 5th position. However, on 20th November, the cryptocurrency has seen a sudden fall from $0.23 to $0.18. Since then, XLM has been continuously struggling to move out of the bearish zone.

At the time of writing, XLM is at the 6th position with a trading value of $0.14. The market capitalization of the cryptocurrency is $2.7 billion. The value of XLM has spiked by 3% in the past 24 hours and the 7 days chart of the coin shows a decline rate of 36.7% as per CoinMarketCap.

IOHK’s Cardano [ADA] has also seen to be in the losers list this week with a crucial depreciation of 32.7%. At the time of writing, ADA is trading at $0.03 with a market cap of $928 million. The coin has settled down at the 9th position right below Litecoin [LTC] which has about $1.7 billion market capitalization.

ADA has been showing a reasonable performance since the 1st week of November. The cryptocurrency was trading at $0.08, which gradually reduced over the week and reached the current point. The highest trading volume for ADA is from ZBG for transaction mining. This is followed by Binance and Upbit with trading volumes of 20.25% and 16.07% respectively. 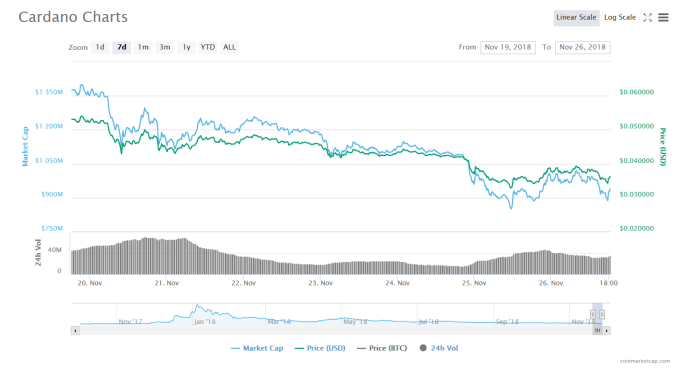